← Finding love without a chase
#Mipsterz →

Love, Whiteness, and Girls in Turbans

Lots of things have been going down at LoveInshallah.com and within the Muslim blogosphere. The recent article on Muslim men returning “back home” to find wives generated diverse cyber chatter, with various responses supporting or criticizing different positions.  On the heels of that debate, the Miptserz-coining, Somewhere in America, video featuring women  in hijabs and cool turbans skateboarding to Jay-Z generated widespread media controversy.  Again, Muslims drew well-argued lines on the good, the bad, and the ugly regarding the video’s use of hijab and contemporary representations of Muslim female identity.  In the middle of these developments, I had two appearances on NPR’s Tell Me More discussing issues around dating, race, and identity.

These events got me thinking about my own orientation to love and belonging.  This would not be page worthy except that these thoughts nudge against how I define myself as a Muslim in conjunction with a desire for love and (re)marriage.  I had some epiphanies: my current world is too small and too White, yet I probably will end up with a white, non-Muslim guy.

I gleaned from the dialogue on arranged marriage the Mipsterz video is that the space I inhabit as a Muslim woman — a writer and cultural creative, divorced, someone who has been in and out of the hijab (and one day, may wear it again) — is highly problematic. The American Muslim community isn’t quite ready for large-scale cultural juxtaposition, complexities, and emerging personal narratives. We swear that we are. We want to be. But let’s be real: we still like our world cozy and certain.

Many Muslim men and women desire to own our stories. But when we tell a new one, observers suggest that there is only one way to walk in the world, and that the way we tread is just wrong.  It seems that our audiences, Muslim or otherwise, still replicate cultural and religious hegemonies that many postcolonial Muslims strive to critique in our own lives.  The presentation isn’t Islamic enough. Or, perhaps the perspective is too Westernized  — as if there is something wrong with one cultural marker over another. As if we don’t all carry such possibilities and contradictions within ourselves.

The Mipsterz video and debate stirred an unexpected longing: suddenly, I missed being a visibly recognizable Muslim like I was in the hijab. I started yearning for a more normative orientation to Islam. I longed for discussions on Muslim issues.  I miss being surrounded by a community of Muslim sisters and the kind of psychic, intuitive recognition that comes when you meet another globalized, transcultured individual who bends towards Mecca.

I miss my hijabi sisters. I miss the women who spout bismillah after a car in front of them slams on the breaks. I long for those dense conversations about Islamic thought and the Prophet’s Tradition. My forehead touches the earth in prayer. I try to remain tied to the rituals.  Perhaps this is my saving grace, my authentic Muslim credentials.  Still, these days, I feel that I hang too far out in the periphery, and that this is somehow unacceptable.

Then, my recent NPR appearances encouraged me to reconsider issues around race and identity as some legitimate criticisms against the Mispterz video centered around the use of the N-word in the music (as well as the the ongoing discussions of racism within the Muslim community).  I had to ponder the raced realities of online dating,  Michelle Obama’s “soft” feminism, and Vanessa Vandyke’s big, beautiful ethnic hair.  I used to think about identity theory all the time when my world was super-sized and global.  During my NPR appearances, I started to feel self-conscious about how White my world has become (“White” being a cultural orientation rather than a skin color). I am going to be honest — these days, I find myself lost.  I wanted my world small post-divorce, but now I find that a such strictures leave me with a sense of failure because there isn’t room for all of my glorious parts. 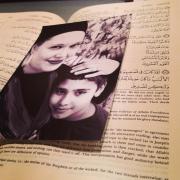 Islam made my world large.  There are complicated identities that emerge from two decades as a Muslim. I had a cross-cultural marriage, I lived in the Muslim world, and I raised first-generation step-kids in America. I have a mixed raced, Third Space Muslim kid of my own. These experiences provide a powerful deconstruction of Whiteness and American cultural identity.

I understand White worlds. There are parts that I find comforting and familiar.  Yet, I am a Muslim woman and a global citizen, and I don’t know what to do with myself in the tiny White spaces I inhabit.  I feel like I am always inside yet also outside.  I often wonder if my discomfort is really just an insecure, White girl crisis. I think, “Shut up about it, Deonna. Get. Over. It.”

Fair enough. But answer me this: how do you explain yourself when you know a great deal of your spiritual and cultural expression will never make traditional Muslims happy, yet you will still remain suspect to many non-Muslims because your hair sometimes smells like curry and you prostrate towards Mecca?

Let me now talk about love, dating and identity since the recent online discussions about marriage and turbanized women, as well as my NPR chatter, points in these directions.

I am a forty-year old divorced white American Muslim woman. I want to one day remarry because I believe in the cosmic wisdom of two individuals coupled together.  I am traditional like that. I desire to meet a successful, hip, creative Muslim guy around my age. But let’s be real: this isn’t easy for younger, never-married Muslim women. Surely, things will be even harder for someone in my situation.

Consider Loveinshallah.com’s resident geek goddess, Zainab Chaudary, or the passionate and beautiful, Ihssan Tahir, or the poetic lioness, Tanzila Ahmed — all writing about their search for love and in celebration of their identity. No one is showing up for these beautiful women.  Musician and recent TEDx speaker, Rajae El Mouhandiz, said that perhaps creative Muslim women are the trailblazers. Perhaps we are the primary authors of a powerful new language regarding identity and belonging — and maybe living without a partner is our sacrifice.

Regardless, all of these women rock but no one will step forward to rock their worlds.  If creative Muslim brothers won’t pull over for these A-plus women, then who is going to consider a divorced white American Muslim woman with tattoos and size zero ear gauges?

Believe me, I think about this every day. The recent debates about arranged marriage, as well as the Mipsterz video, highlights how creative Muslim women with transcultured identities are suspect to many eligible Muslim brothers and to the larger community. Meanwhile, our Muslim parts makes us suspect to non-Muslim men.

I desire companionship and longterm love.  In my reality, it is easier to look outside of the faith for a spiritually and intellectually  sophisticated individual.  It is a matter of sheer numbers: there are more non-Muslim men who will find me suitable as a potential partner than Muslim brothers. I wish that it wasn’t that way. Yet, I worry if I will be able to bring all of my parts to any relationship. Then, there are the religious matters: Can I get to Hajj if my husband is non-Muslim?  What if I decide to wear the hijab again (I don’t rule it out). Will he be OK with my prayers? And the big one —Will a Muslim man respect my personal religiosity?

There is a life cadence that belongs specifically to Muslims, even those deemed “nontraditional,” which becomes evident once coupled with someone for the long haul. I can’t help but to find myself in a dilemma: “I may not be able to find a Muslim man who will get me, but what will I have to leave out in order to be with a non-Muslim?”

So here I am, once again, trying to figure out what to do with my single, white American-Muslim self — all because of an article on arranged marriage, a video, and public radio.

Deonna Kelli Sayed is a Love, Inshallah contributor and a LoveInshallah.com editor.  She is a published author. Her work is also found at  altmuslimah.com and Muslimah Media Watch. Deonna is happy to report that she now feels like a “real” writer, and one who is currently working on a memoir with support a Regional Artists’ Grant from the North Carolina United Arts Council. To learn more, visit her website, and join her on Facebook and Twitter.

9 Comments on “Love, Whiteness, and Girls in Turbans”