← Love in the Time of Islamophobia
Why I Stayed →

How many racists have I slept with? 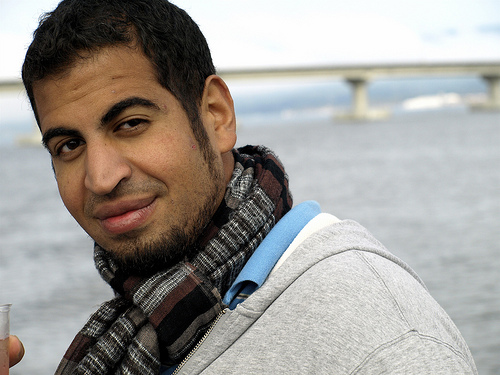 For the first time since 9/11, I am afraid to leave the house.

Even when the bombs started dropping on Afghanistan and Iraq, my naive 20-something self at the time was certain I’d be safe here in the U.S. Especially here, in Southern California.

People always tell me how laid back and “West Coast” my vibe is, right down to the relaxed cadence in my speech. I was confident and comfortable in the knowledge that I was from here. Those distant wars were not about me.

With the rise of Daesh, acts of terror are again being unleashed in the false name of my beautiful religion. A new generation of Islamophobia is now in full effect.

I will not be referring to any “Islamic” state. The idea that Islam has anything to do with Daesh is preposterous and dangerously misleading. I will not taint the name of my faith.

I will not sit back and allow Islam’s reputation to be controlled by a militant group who asserts power through acts of violence. Over a billion Muslims around the world cannot let the beauty and peace of Islam be compromised and used as fearful propaganda. Islam cannot be allowed to divide the world. We know that the practice of Islam is a practice of peace. Like most religions, Islam fosters love and compassion and unites people across all social boundaries.

Today, I am shocked by how many people I know are drinking the Kool-Aid, happily ingesting the fear and the hate. I’m frightened by how my “friends” have allowed the lines to be blurred in their minds.

Have you forgotten that you know me? That we have shared special times together? Or have you been viewing me as “the Other” this whole time?

And if you don’t view me personally as different, am I then just the exception? I am not them and they are not me, right? You’ve disassociated us and everything’s ok.

I’m starting to wonder who I can trust.

The other night, over a group text, I got into an argument with a “friend” about refugees from Syria. I started the conversation by sending a link inviting my friends to an Arab American storytelling event I am co-producing in a couple weeks. The event would also serve as a fundraiser for Syrian refugees.

Only one friend responded: “Syrian refugees…hope it’s not for them coming here.”

I responded: “That’s a very problematic thing to say”

“Well for now, yes, but the American public is against it.”

“You can’t generalize and say the American public feels any one way.”

“Ok as long as they don’t come here. It’s too dangerous.”

“I was born here. Totally serious. Not joking. It’s an opinion shared by a lot of people after what happened [in Paris]”

“That’s living in fear, based on ignorance.”

“You know what ,I don’t live in fear. You’re ignorant if you think so.”

The conversation descended into an all-out mud-slinging text war after that. I may have hurled the first insult by calling him ignorant. In hindsight, I probably should have kept my cool a little longer and asked questions instead of letting my emotions get the best of me.

He got me real turned up. I thought I could trust him.

Our back story: He and I dated briefly a few years ago. It didn’t work out due to “political” differences. But since we met through mutual friends, we still run into each other from time to time. And we are on a group text together.

The others on the text did not chime in during this battle. I’m sure it was very awkward for them.

I felt so deeply violated by the things he was writing:

“Those refugees may be terrorists or sympathizers. You don’t know them.”

“They don’t value anything more than killing Americans.”

“I don’t want to be blown to pieces or beheaded and shot to death.”

My skin was crawling. I had been intimate with this person. I let this person into my home, into my bed. Did he have those same views when the lights were off and I was lying on top of him?

He kept repeating how he was born here, which I gather was some sort of justification for his perspective. Except I was born here too. I guess he forgot that. Or he didn’t bother to learn. Maybe part of my allure was that I was from a “foreign land.” Don’t let the truth get in the way of a good story, right?

I wanted to vomit. How many of the guys in my past who I have been intimate with have operated with this same bigotry? They tell me to my face that they want me, but when the lights are on and they’re gone, how many of them are out there buying and selling the hate?

It’s surprising how people can be intimate with each other’s bodies in the privacy of their bedrooms, but can’t see past their biases in the real world. How fucked up in the head do you have to be to disassociate a person’s identity from their physical body?

I never know how to interpret when a guy tells me that they love Arab guys but yet they don’t have any Middle Eastern friends. What is it that you love about us exactly? You don’t seem to take the time to get to know us. Is it the sense of danger we carry? Is it our fabulous hair? Our bushy eyebrows? Our furry chests? Are we just the right animal you’re looking for to add to your jungle of wild beasts?

Fuck you for turning the world into a place where I can’t tell my true friends who love me apart from the ones who are just pretending.

I want to crawl under the covers and stay in bed until the madness passes. Will it ever pass?

Ramy Eletreby is a queer Afro-Arab American artist based in Los Angeles, California. He writes, performs, and facilitates theater projects with diverse communities all across the country. His story The Ride was featured in Salaam, Love: American Muslim Men on Love, Sex, and Intimacy, the acclaimed follow-up to the groundbreaking Love, Inshallah; The Secret Love Lives of American Muslim Women. He is currently developing a solo show and hopes to premiere it in Winter 2016. Connect with him on Twitter: @dramarams

6 Comments on “How many racists have I slept with?”