I groggily grab my phone. It’s 3 am, and I’m on a business trip to Chicago. I have a missed call from my little sister. I call her back immediately. I can hear that she is scared to tell me, to be the messenger of bad news. She tells me that my Nana has died. She knows how I hate to be told about deaths over the phone; I was told of both Mom and Nani’s death in similar late night calls. She says that he died in the ambulance going to the hospital from his home in Dhaka.

“Okay,” I respond, unemotionally. I check myself: no feelings. Just empty.

On some level, we had been expecting it. He was 87 years old and his health had been deteriorating for the past few years, ever since my Nani died. They were married when he was 21 and she was 16. He had lived for her. Without her, his mind unraveled.

When I went to Kathmandu to care for him in the summer of 2013, he was in the beginning stages of Alzheimer’s Disease. Of course, my family had not told me this at the time – they had just said he was a cantankerous old man. Overwhelmed and alone, I pieced it together after reading the labels on the boxes of pills I was administering to him daily. Those two weeks alone with him in that dark cold house were easily one of the most traumatic, mind-spinning periods of my adult life.

END_OF_DOCUMENT_TOKEN_TO_BE_REPLACED

A Hate Crime Against the Universe 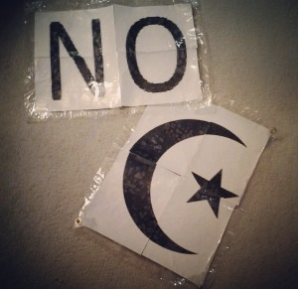 It was a rainy and cold night in Los Angeles. The rarity of the rain added a sheen of intrigue as I drove up the 101 freeway through downtown. I glanced at the overpasses above, nearing the place where I’d been told the signs would be. Sure enough, there they were – jankier than I expected, but still expressing their intended hatred. In black pixelated letters one sign said No, and the other featured the image of a crescent and moon.

I took the next exit. After circling around for a few minutes, I finally found the exact overpass on Alameda St., between the city jail and Union Station. I rolled by, slowly. The signs were four laminated, letter-sized pieces of paper forming a larger rectangle. From the grommets at the corners of each sheet, plastic zip ties kept the signs fastened to the chain link fence.